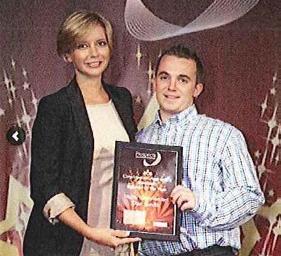 We are delighted to announce that Ruggles & Jeffery Apprentice, Daniel Smith, was a finalist at the recent Prospects College Awards 2011. Daniel was nominated for this award by his Tutors at Prospects College.

Just 96 specially selected Students were invited to the prestigious awards ceremony held at Liquid and Envy nightclub in Basildon’s Festival Park on Wednesday 14 September. The glittering occasion celebrated the commitment to skills and training of Students, Employers and Stakeholders.

Daniel was Highly Commended in the Basildon Construction Apprentice Student of the Year category. Daniel received his award from Countdown’s Rachel Riley watched by his proud parents, Bob and Anita, and Tony Hannon, Director at Ruggles and Jeffery. “I am absolutely delighted for Daniel, as the award recognises all his hard work, skill and dedication.” Tony remarked after the ceremony.

The evening was hosted by Rachel Riley who urged students to follow their dream and not to get disheartened when life presented challenges and barriers.